In less than 2 weeks, a new rubicoat powder line was assembled and launched. 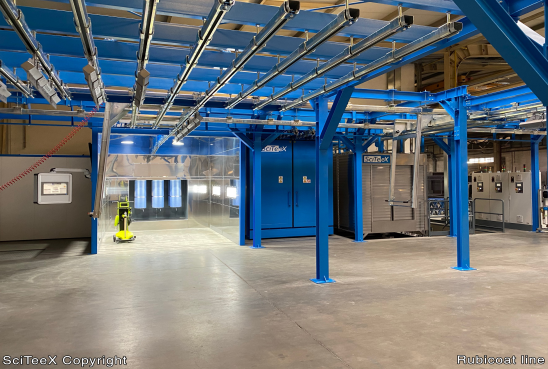 The installation consists of a multi-treatment spray, automatic washer, a polymerization oven which also operates in dryer mode after washing, a powder spray booth and an extensive process transport system with storage. The line allows to process 3m / 1500kg parts.

The paint plant not only complements the technological capabilities of the SciTeeX factory, but provides the field for the implementation of innovative solutions and for conducting technological tests of thermosetting coatings on the details entrusted by customers.

The Rubicoat powder coating plant in the factory enriches the machine park in a continuous demonstration.

Continued expansion of patio 2020/2021 in the factory.
4 beautiful, soliters of multi-stem plane trees, variety ‘Minaret’, just arrived from the Netherlands. 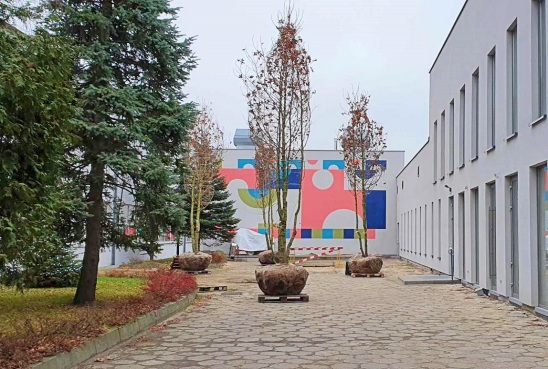 Their distinctive feature is the decorative bark, which looks like a military camo.
When received, they were set to their destinations, creating an overview of the project.
Trees will provide a unique climate and also attract nature to our factory.

Realization of the mural in the factory

The first element announcing a comprehensive change of patio or mural, by Paweł Ryżko and the performance of Cezary Hunkiewicz. It refers to the architecture of the factory and to the philosophy of SciTeeX. 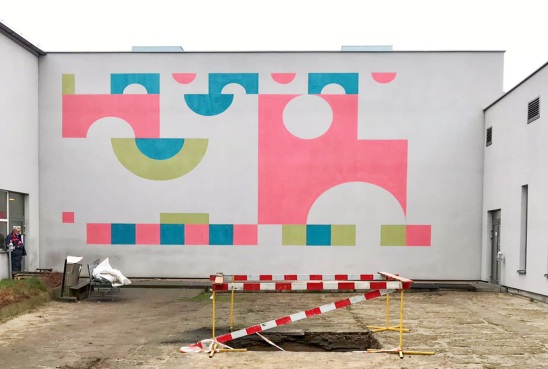 Made with the highest precision and planned for a millimeter, it includes a symbolic division of the building into two parts, and also includes references to the revitalization of the patio.

The mural was designed by Paweł Ryżko, an artist and graphic designer. Laureate of numerous awards and participant of several exhibitions around the world

His paintings are also located in the Warsaw headquarters of SciTeeX.
Brain Damage Gallery is responsible for the implementation of the mural.

From idea to patio design

After developing the guiding thought, it was time to turn the idea into a patio design. 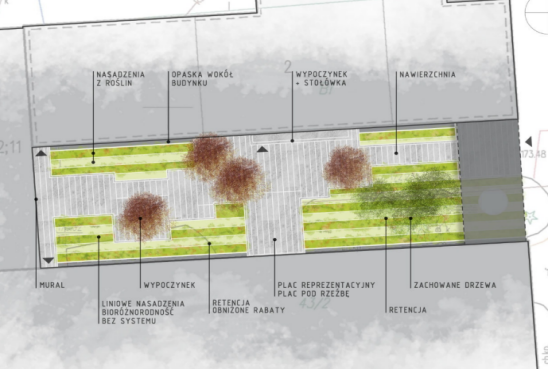 The design of the patio involves new plantings, the presence of art elements (murals, sculptures) and architecture, allowing for outdoor meetings, including the consumption of meals served in the factory restaurant.

The patio project was created in cooperation with the Lublin landscape architect Wojciech Januszczyk, our investment department in terms of infrastructure and users.

The patio is planned for summer 2021.

With the beginning of February, a water cutting machine was launched in the factory, which complements the already rich machine park. New technology optimizes the production process of SciTeeX products. When cutting grade steels, the cutting edge is not hardened, which facilitates subsequent machining and speeds up the construction of machines.

In addition, the machine will be used to replace labor-intensive manual operations when making rubber guards and seals or plastic products.

In the 16th edition of SteelFab Sharjah 2020, guests were taken by Ajish THOMAS, Director of SciTeeX Middle East.

Steelfab is the largest trade fair in the Middle East area, dedicated to steel processing.
300 exhibitors from 27 countries presenting more than 700 global brands including, of course, SciTeeX, one of the few representatives of the surface treatment industry.

SciTeeX has been participating in Steelfab every year since 2011.

Thanks to its activity for more than 10 years, SciTeeX has been recognized in the Middle East market as an industry leader. 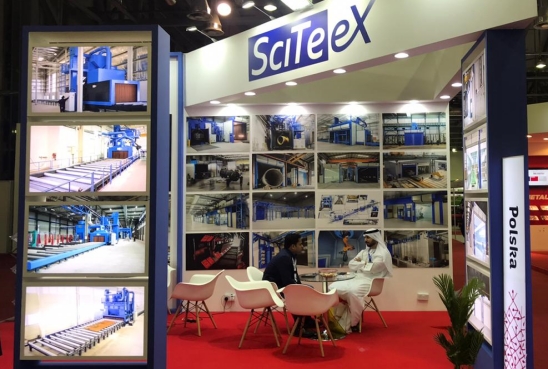 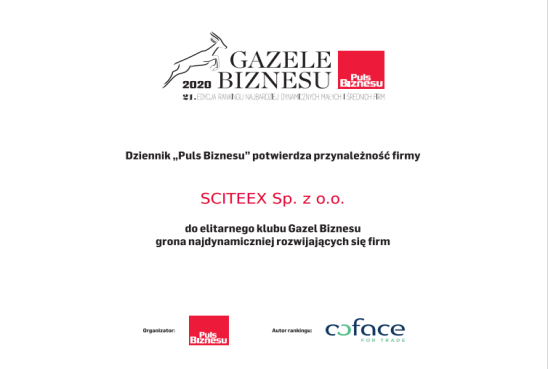 The Ranking of Puls Biznesu (www.pb.pl/gazele) distinguishes the most dynamically developing companies in Poland. The survey has been conducted since 2000 to promote small and medium-sized companies that can successfully compete for a good position in the market.

The machine ensures high precision and bending efficiency, with much less physical involvement of operators. Panel processing is almost automatic, which is a big improvement. Once on the edges of the arcades operators had to rotate and lift heavy panels.

The new investment not only improves operator safety, but also offers new technological possibilities such as bending over a large radius or ironing edges. 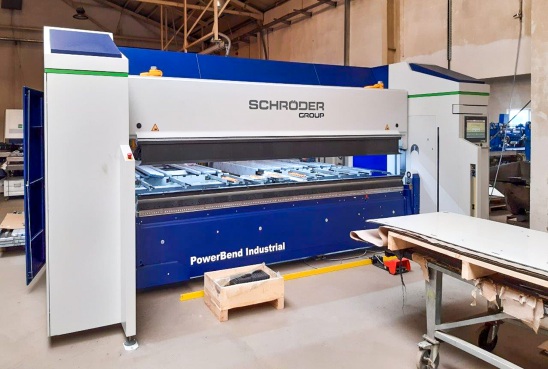 As part of the factory’s expansion work, a project was established to create a meeting and resting place among nature and art. The Company continues the idea of creating a work-friendly and motivating environment for its employees. 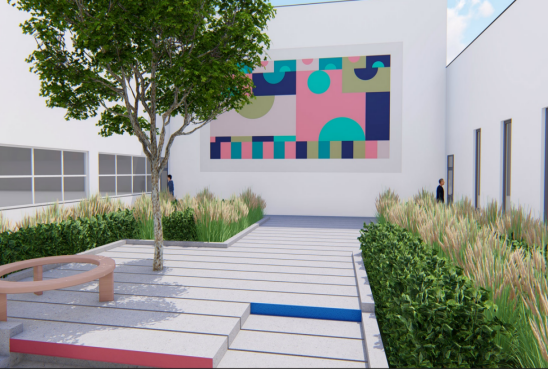 The main objectives of the project are

We will keep you updated on the progress of the project on a regular basis.

Newly opened restaurant in the factory

The first meals in the restaurant on the premises of the factory has been already served.

For the sake of satisfied employees and good morale, in the factory was built a comprehensive dining area with modern kitchen facilities and a spacious, bright dining room. Especially enjoyed are the new and stylish interiors, which focus on functionalism and authenticity of the ground finish.
Also, the dinner menu is matched in both standard and fit versions, so as to cultivate care for the combination of heart and stomach.

SciTeeX Group has exhibited for the ninth time at the Fair EXPO SURFACE in Kielce.

On April 28th – 30th, 2017 SciTeeX Group showed, among other things, pneumatic blast room type CABILUX with automatic abrasive recovery system. The equipment of partners cooperating with SciTeeX was also presented: blasting pressure pots of ACF, powder paint applications of SAMES, infrared dryer technology of SUNKISS, the company, that SciTeeX has been cooperating for over 20 years with.

In the Anti-Corrosion Technology and Surface Protection Fair participated about 100 exhibitors and 13 000 visitors.

SciTeeX Group once again presented innovative products at the fair INDUSTRIE PARIS.
Among 850exhibitors and 20, 000  visitors SciTeeX Group as the only one presented a complete shot-blasting chamber CABILUX II with modern LED lighting. 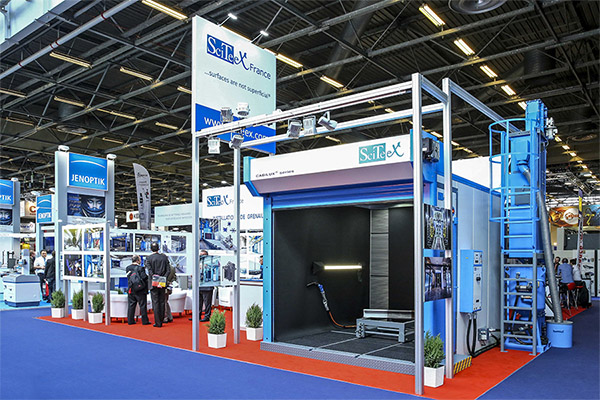 Surface Technology 2015 at the Hannover Messe, the largest industrial fair in the world.

SciTeeX, as only one of 400 exhibitors at Surface Technology, presented to over 220 thousand visitors a blastroom completely assembled respecting the size restrictions of the stand.
Surface Technology 2015 was cooperated with Sunkiss MATHERM – SciTeeX partner in the field of IR radiation for more than 20 years.

SciTeeX Group at the INDUSTRIE PARIS 2014

The SciTeeX Group participated in the INDUSTRIE PARIS 2014,  the largest Industrial Fair in France. The Fair was an opportunity for more than 1000 Exhibitors to present their newest achievements to more than 25 000 visitors. SciTeeX was the only company to demonstrate a complete CABILUX Blastroom, which represents a complex solution in the surface preparation area. 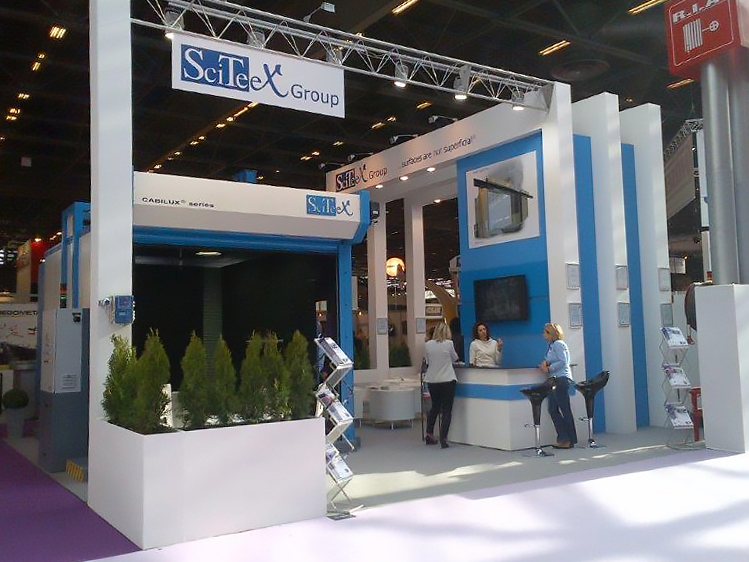 SciTeeX Group at the HANNOVER MESSE 2013

Cooperation of the SciTeeX Group with ACF has fruited in a mutual Exhibition Stand at the  HANNOVER MESSE 2013.
Of all the HANNOVER MESSE 2013 Exhibitors, SciTeeX was the only one to show a complete blastroom.
New generation Cabilux Blastrooms, Series II, are characterized by, among other things,  an LED illumination system.. 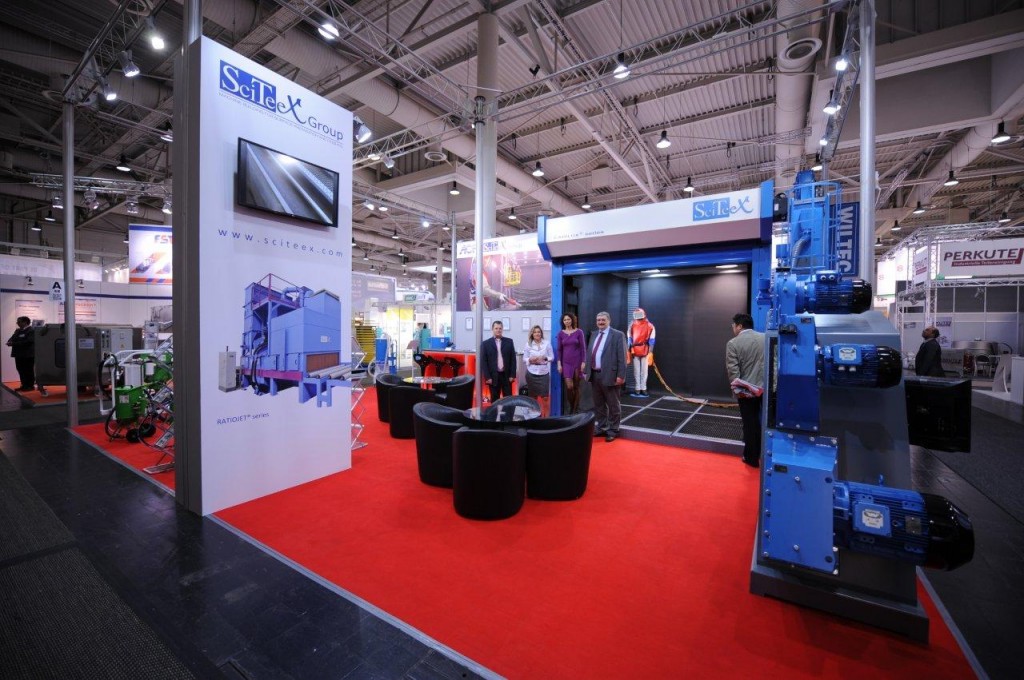 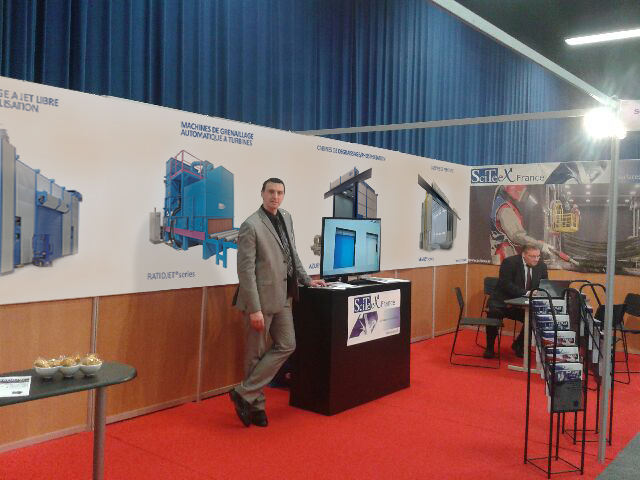 SciTeeX Group were one among the 400 Exhibitors from 25 countries present at the SURFACE Fair, Kielce, 2013, showing their products in the surface treatment and anticorrosive protection area. This is SciTeeX Group’s 5th participation in the SURFACE Event at Kielce. SciTeeX used this opportunity to present Group’s newest achievements to about 5000 visitors. 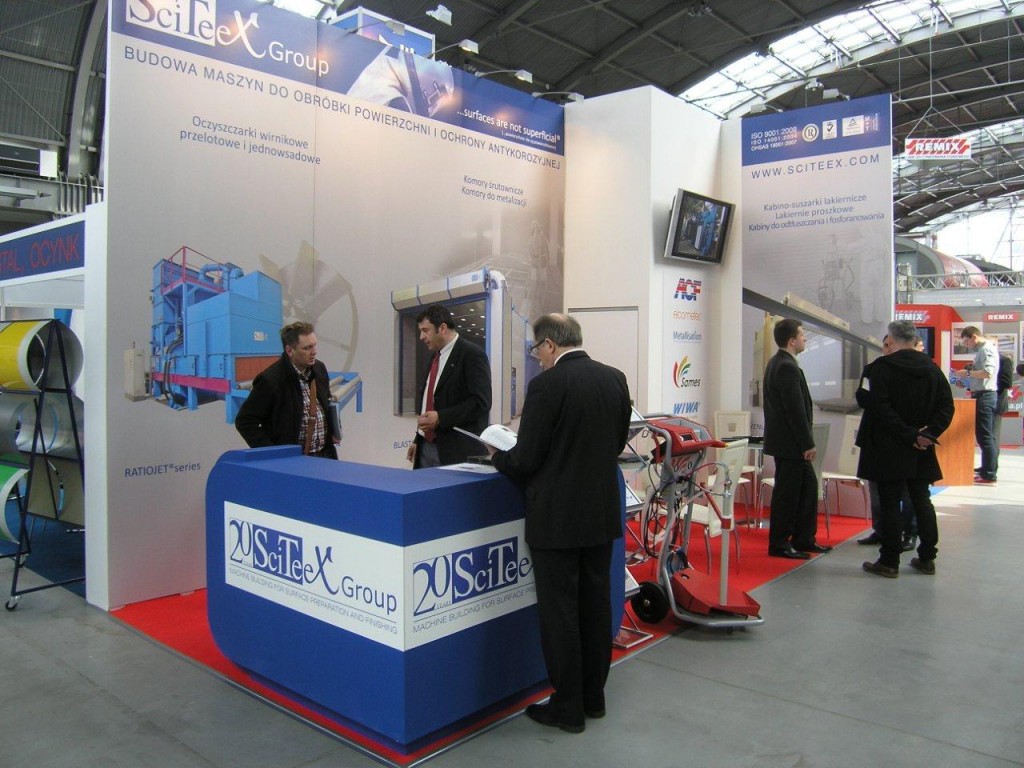 The SciTeeX Group took part as an Exhibitor in the Steel Fab Sharjah (14-17 Jan.) 2013 Fair, the largest United Arab Emirates (UAE) Exhibition
dedicated to metal working, metal manufacturing and steel fabrication.
More than 300 Exhibitors from all over the world representing the steel processing and treatment area, attended the Event.
The SciTeeX Group has been progressively increasing their involvement in Gulf Cooperation Council’s (GCC) markets.
The SciTeeX Group is planning to open a ‘Branch Office’ in Dubai, UAE.
Those interested in cooperation on this market are kindly invited: gcc@sciteex.com. 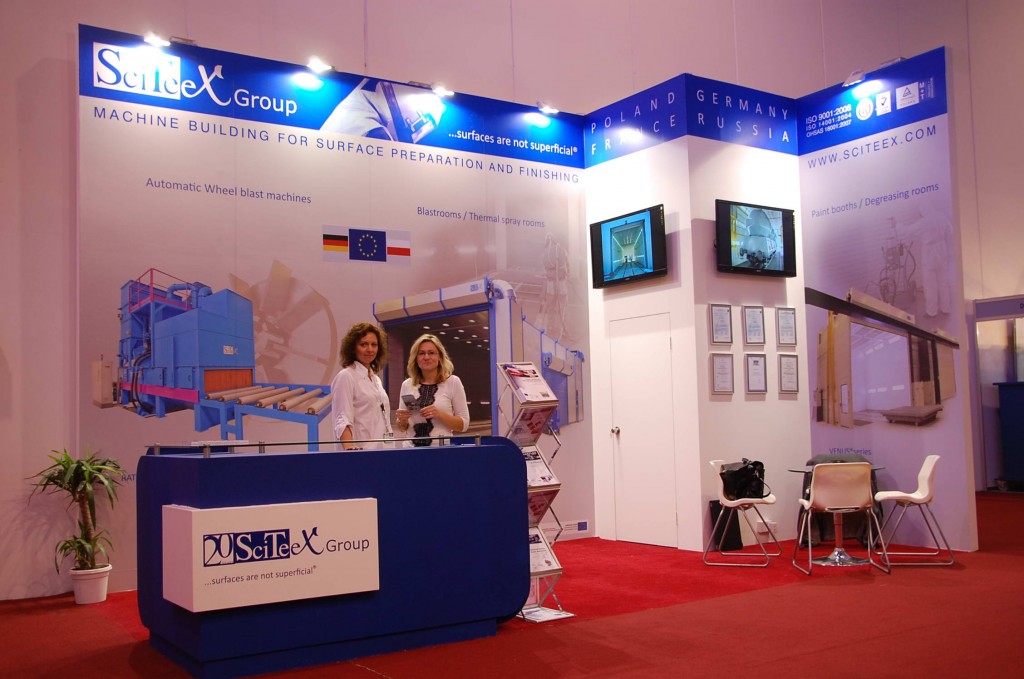 SciTeeX Group participated in fair SURFEX 2012 from 29th May to 1st June 2012. SciTeeX presented a pneumatic blast machine CABILUX on its stand. 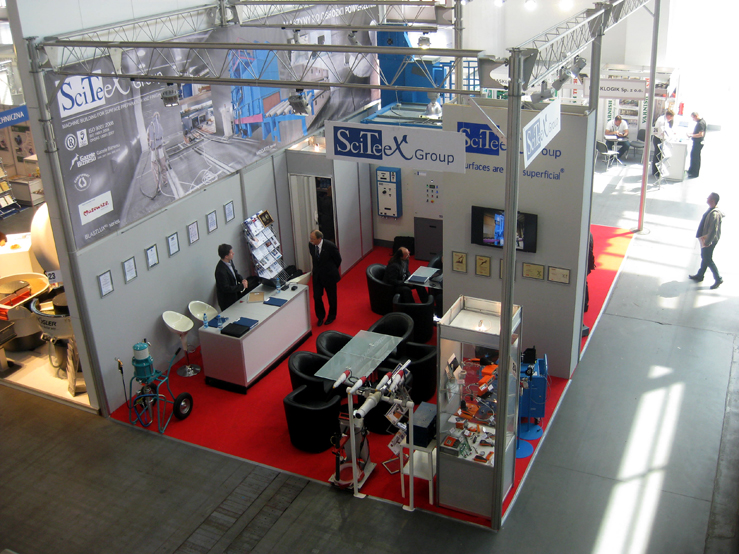 SciTeeX Group participated in fair INDUSTRIE PARIS 2012 from 26th to 30th March 2012. On this occasion, SciTeeX, only manufacturer exposing a complete surface treatment installation on its stand, presented a pneumatic blast machine CABILUX. 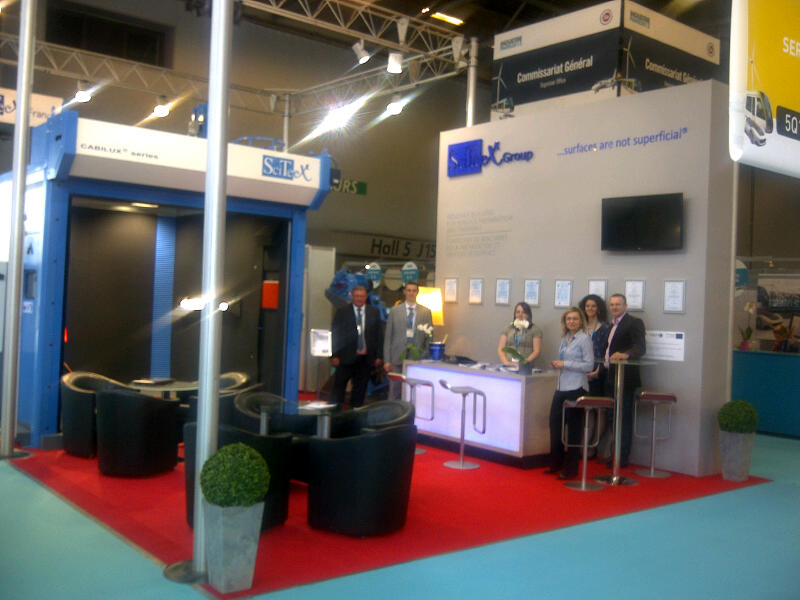 Meet us at Fairs